BOCA RATON – The Greater Boca Raton Beach and Parks District on Tuesday directed its staff to launch the initial phase of the design and development of the Ocean Strand beachfront property.

District commissioners tasked Executive Director Briann Harms with gathering input from the City of Boca Raton and the community at large that will be evaluated as part of the design for a new public park on District-owned Ocean Strand, creating another sensational seaside setting in Boca Raton.

“I would like to see Ocean Strand developed and I'd like to work with the City of Boca Raton in developing it and integrating it into the city's waterfront plan,” commissioner Steven Engel said

Located north of the Gumbo Limbo center on A1A in Boca Raton, Ocean Strand is 14 total acres of formerly residential property (11 along the Intracoastal side, three acres on the beachfront) that the District purchased in 1994.

The goal has always been to turn the property into a community park.

“Public input has been a hallmark of District projects,” Harms said. “The Board values every resident who cares enough to get involved and ensure that projects reflect what residents want.”

Gathering input from City officials at the project's onset assures the city council a voice in Ocean Strand's eventual design and use. Collecting ideas from the community allows the District gauge the desires of the people who will ultimately benefit most from the park.

“It's a beautiful stretch of property that's been dormant for too long,” Commissioner Erin Wright said. “Today we began process of opening that area to the community.” 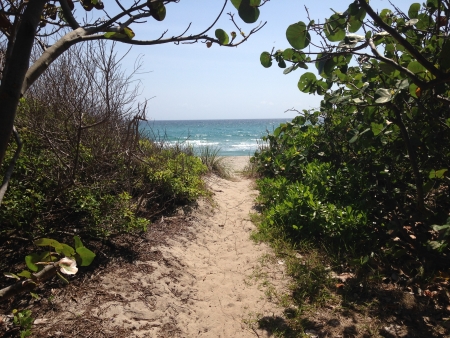